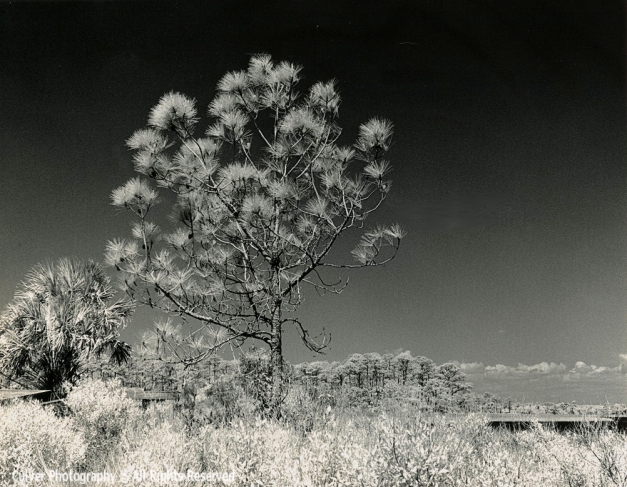 This star burst tree, as I like to call it, was taken by me at Princess Place Preserve along Pelicer Creek in Central Florida.  The dark sky and the highlighted areas are a product of the Ilford SFX Infrared sensitive film used in combination with the opaque R72 filter.

Taken by Marks along Bulow Ditch you get an idea of the tangle of scrub, bushes and trees found in the woods of Florida. 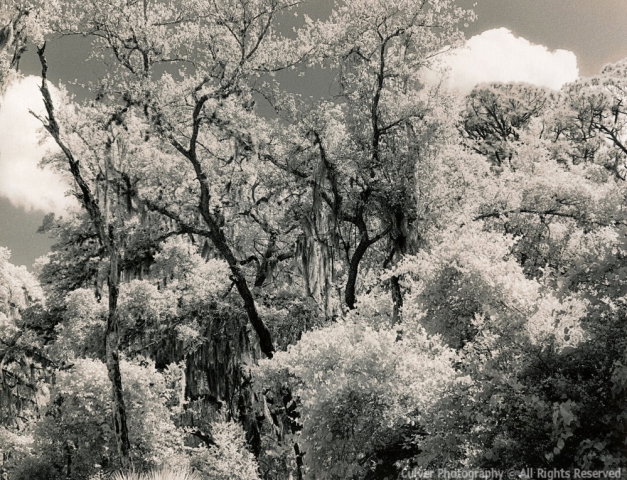 Another one from Marks taken along Bulow Ditch. Beautiful clear water reflecting the rocks and shrubbery. 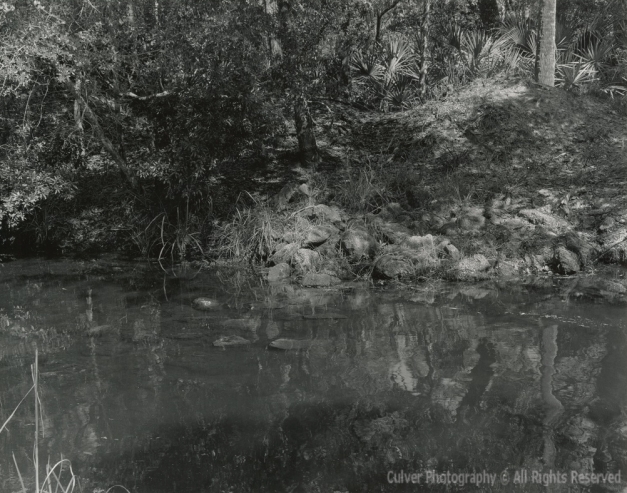 Different types of film displayed will give you an idea of the difference between regular black and white film and the infrared sensitive film that I’ve been using.

Enjoy and have a wonderful day.

A Bit of This and That

For those of us in the United States our Memorial Day weekend is upon us.

The last Monday in  the month of May is the day we remember the men and women who died while serving in the United States Armed Forces.

We had wanted to do something special for Memorial Day, but somehow home projects always get in the way. The fun of home ownership.

Marks took this beauty in our studio using his Mamiya C330. Our orchids have been flowering profusely since they were moved to the East facing kitchen window and he wanted to capture some of their beauty before it was gone.

He used a different film developer for this film, namely PMK or Pyro. It’s actually an old time developer which gives the film negative a strange look but brings out some amazing detail.

Technical details and timings can be found on Marks’ Flickr site:-

I’m still having fun experimenting with the Infrared film so here’s my contribution. 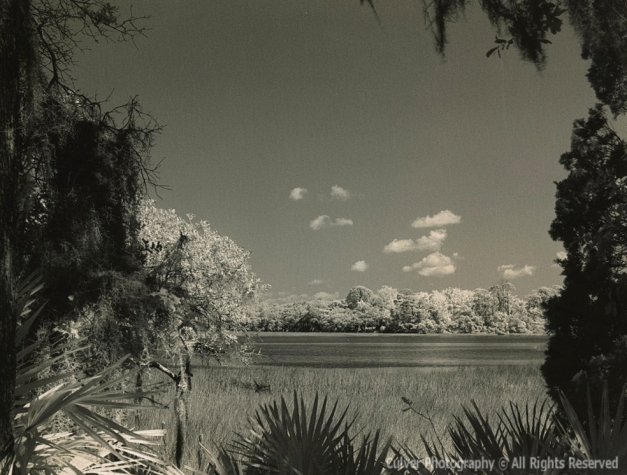 This was taken by me using the Mamiya 645 Pro TL loaded with Ilford SFX using the opaque R72 filter at Princess Place Preserve overlooking Pelicer Creek.

This has taken on a slightly different look than the prior infrared images I’ve posted as we decided to try some carbon toning to lend a warmer tone to the image.

Here’s a link to my Flickr site for those technical details and timings:-

Happy Memorial Day to everyone in the United States. Remember to honor those who have given their all so that we might live in this wonderful country.

“The Little Cloud who Could” in IR Film

We’ve been busy in the darkroom so have been slacking off blogging regularly.  We’re also trying to get a lot of film shot as we won’t be going out in the heat of summer, which will be upon us before we know it.

Here’s the last two from my second roll of infrared shot with the Mamiya 645 Pro TL. 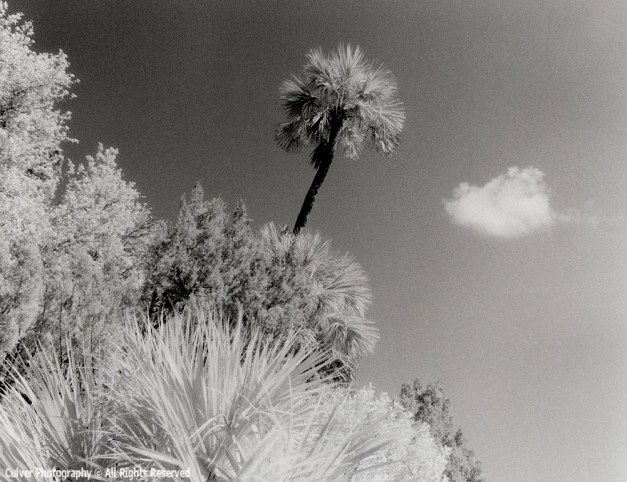 This little “put put” cloud (the Smart car of clouds) came puttering along just as I clicked the shutter. It almost looks like a little cartoon.

Technical details and timings can be found on my Flickr site:-

Technical processing and timing can be found on my Flickr site:-

Hope all the mom’s are enjoying their special day.

Here are a couple more from the infrared roll I shot at Bulow Ditch.

The Path in IR

Here’s all the technical information on this shot:-

Against a black sky

Enjoy everyone. We’re hopping on the Harley for a Mother’s Day ride. 😉

Behind the Scenes at Princess Place Preserve in “Digital”

The weekend is upon us again.  Soon it will be too hot and uncomfortable to be outside photographing so we’ve been making good use of the somewhat cooler temperatures. We’re trying to get ahead so that we have enough film to keep us in the darkroom when it gets really hot.

Wednesday found us at Princess Place Preserve in Flagler County.  A couple of friends came along and took some digital images of us shooting film which we thought you’d like to see.  You’ll notice from these shots that we weren’t out in the wilds of Florida. Instead there are concrete walking paths. We still go prepared though, as we do often meander off the path and will end up standing in a area of palmetto bushes which snakes just love to hide in. 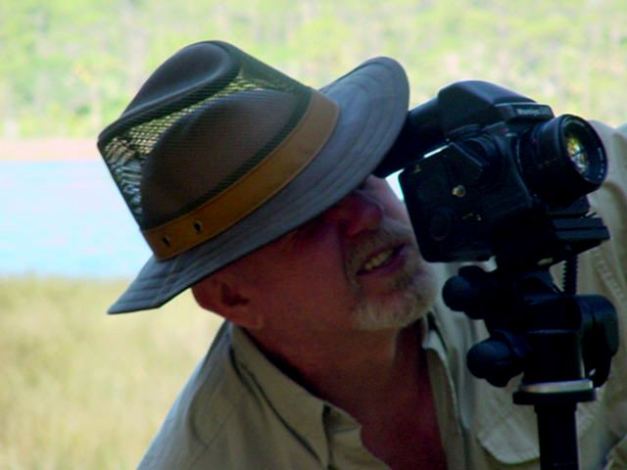 Marks looking through my lens

See what I mean? Marks in the Palmettos 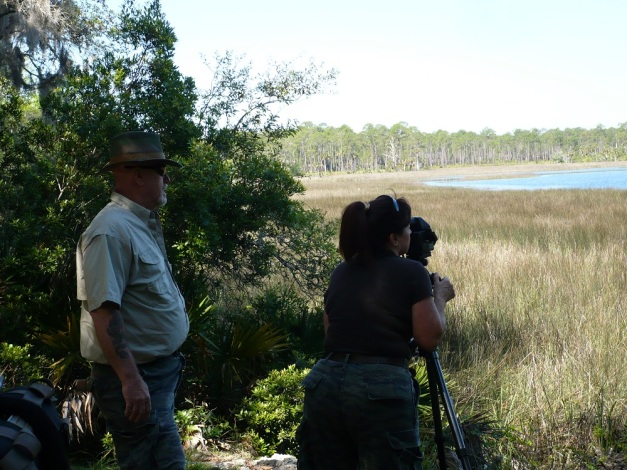 Waiting for the wind to die down

MMM…. Would this look good in infrared?

This was the image Marks was getting ready to shoot. His camera has a waist level view finder which I find more difficult to use. He also has a #25 red filter on his lens which makes for interesting viewing through the view finder. For the black and white film image, it really darkens the leaves and accentuates the clouds. My camera has a diopter type view finder which I can adjust for my vision when I’m wearing contact lenses.

Thanks to our friends for taking these for us. A great memento to have, share and keep. We have a bunch more which will be posted at a later date.

Have a great day and enjoy the weekend. 😉 Happy Mother’s Day to all the moms out there. 🙂

Taken along the creek in Bulow.

Technical details can be found on my Flickr site:- 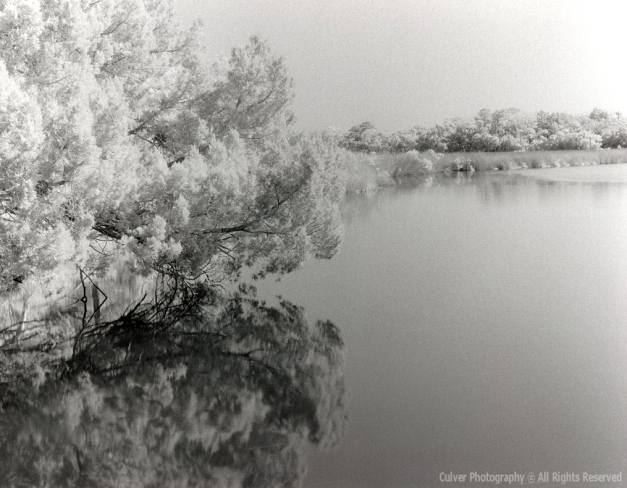 Both are scanned from the silver gelatin prints we produced in our darkroom. Other than a few specks of dust which were removed after scanning, no further manipulation was done.

Technical details and timings can be found on my Flickr site:-

Enjoy and have a great day.

Some more from the second roll of infrared film shot in the Mamiya 645 Pro TL.

Along Bulow Ditch with IR

This was taken with the sun at my back and I can see that this is ultimately the result I’m looking for. That almost surreal other worldly look to the leaves. You can see the different way that different leaves reflect the light and provides many different layers to this image. I really love the way this one turned out.

Technical details can be found here:-

This next image is interesting and shows dramatically why the angle of the reflected light to the lens is crucial.

This view took on a frosty appearance because this was taken facing Southeast. The sun was high in the sky, putting it just to the East while I was facing South.

At this time of the year in Florida the sun is almost always slightly South and never directly overhead. I still really love the effect that this gave.

I took a photograph several years ago of this same view which we did in Lith. Apart from the Lith processing, the only difference to the image is that the tree limb in the very front has since broken. Next time it will probably have fallen off altogether.

I’m loving experimenting with this film. The ethereal images I am getting are right up my alley.

This was the first time I used the opaque filter, the R72. Focusing was done without the filter on the lens. Once everything was all set up, I added the filter. I caught myself each time trying to look through the viewfinder only to find that with the filter on I really couldn’t see anything at all. That was pretty strange for me because before I press the shutter I’ve always double and triple checked my focusing etc. Couldn’t do that this time though. 😉

All the technical detail for this image can be found here:-

From a soggy wet Florida, have a great weekend from both of us.